Schempp-Hirth Presents Enhanced Arcus.
Days before opening of AERO exhibition, Schempp-Hirth successfully performed the maiden flight of an Arcus that has been enhanced by many details. This prototype will now be shown to the audience and the specialized press for the very first time.
After the Arcus was first flown, more then 300 of these popular high-performance gliders were built and performance benchmarks in the Two-Seater Class have since been re-defined, proven by countless titles in national and international championships. During the past year, Schempp-Hirth decided to enhance the successful model by a number of aerodynamical and functional details, listed below.

Increased Maximum All-up Mass: The enhanced Arcus’ motorized versions are expected to be certified for a maximum take-off weight of 850 kilograms (1774 lb). Maximum wing loading will be increased to nearly 55 kg/m2 .

New Winglets: Developed in cooperation with Dr. Mark Maughmer, Pennsylvania State University, the new winglets further increase both the Arcus’ performance and handling - and resemble the sleek winglets of the Ventus.

New Elevator: Evolved in a joint research project with the German Aerospace Center (DLR), the new, smaller and thinner tailplane results in reduced drag and is also less sensitive to bugs.

Bug Wiper Garages: The bug wiper garages proven in the new Ventus have been fitted into the new Arcus’ fuselage, providing the same improved aerodynamics and performance gains. As a side effect, bug wipers can now always be stowed properly when putting the glider back into the trailer.

New Canopy: Designed in cooperation with some enthusiastic Arcus fans, the optional slimmer new canopy not only looks racier, it also reduces the fuselage cross-sectional area for a further aerodynamical gain.

Revised Cockpit: In cooperation with Ottenwälder & Ottenwälder, a leading industrial design agency, The Arcus cockpit was given a complete review. The interior now features the same technical-elegant carbon fiber finish as found in the new Ventus. The new backrest is infinitely adjustable at any time, providing more comfort and additional space for the front seat. Newly created ergonomic handles improve the handling of essential controls such as flaps, air brakes and engine. The redesigned, consistent and non-reflective labels were also reduced to a minimum amount. This gives the cockpit a tidier appearance, provides more clarity and increases the pilots’ power of concentration. Checklists and data tables have been collected and relocated into a booklet that is magnetically fixed at each seat, which increases comfort and also safety by making the content easier accessible.

Electrically Retractable Gear: The Arcus’ robust, large, spring-loaded undercarriage is now being operated electrically. The new, maintenance-free mechanical drive in combination with an elaborate control result allow simple gear operation from both seats. An emergency system with built-in backup battery ensures save gear extension before landing even with flat main batteries or in case of an unexpected main control failure.

After a few pre-series units, the enhanced Arcus edition will go into serial production in 2020. 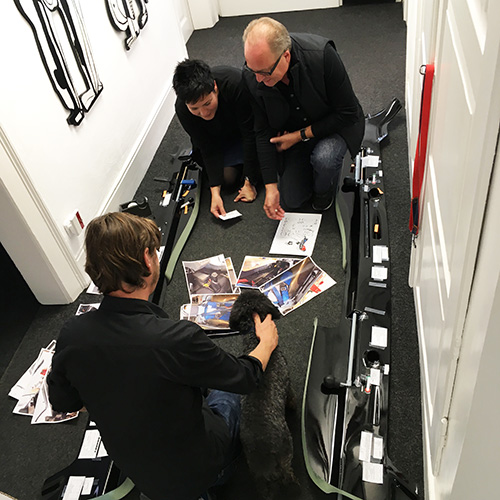